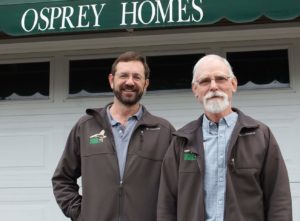 When Dan Wisner and Kaare Papenfuse first met, it was to build Dan’s house. What they ended up building was a partnership that has stood the test of time. “Kaare’s skills and my skills are very complementary,” says Dan. “We got along so well we looked into going into business.” That was 1991.

What began as an early partnership between two new friends has become Osprey Homes, our local builder celebrating 25 years building in Clark County.

The owners credit their long history of building affordable quality homes to having a product that stands the test of time. But it wasn’t always smooth sailing, such as during the Great Recession which Dan says was a “brutal” time on home builders.

Kaare believes they weathered the recession largely due to their network of great relationships with subcontractors and suppliers, and loyal employees who are treated like family. Also, everyone got paid.

“Going through the recession we had no debt forgiveness and all our subs got paid,” says Papenfuse. “It was a struggle.”

The owners agree it’s this business ethic that has not only carried them through the bad times but has made their business grow from its small beginning to where it is thriving today.

“We had a small start but Kaare’s skills of designing houses that were more affordable to build gave us a leg up on the competition,” Wisner said. “The homes Kaare builds feel bigger than they are and people feel like they get more for their money.”

Dan says the floorplans Kaare designs “walk better and are cheaper to build.” Both partners agree this is a big factor for their customers. Osprey Homes uses “production style building.” They get bulk deals on materials and bring the savings to their customers.

Giving their customers the most building for every dollar is a company goal. “We may not be fanciest builder in town but we always give customers best value,” is how Kaare describes it.

“But value doesn’t always mean lowest cost,” Dan clarifies. Like his company, he wants houses built by Osprey Homes to also stand the test of time. He gives examples such as his preference for installing heat pumps over the more popular gas furnace, because studies show heat pumps cool cheaper and last longer. Also, Osprey Homes uses a higher grade of flooring which has proven to outlast cheaper flooring used by other builders. 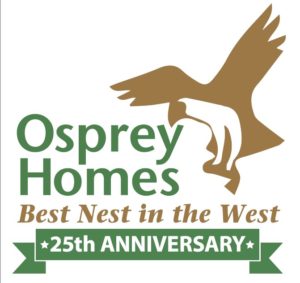 Like the steps they’ve taken to make their business and products last, the Osprey Homes owners were also quick to consider environmental impact which shows in their green choices for materials and appliances. Dan says Osprey Homes was one of the first members of the Green Building Council and of the first local builders to take steps to segregate their waste stream.

“We love the outdoors. We both hunt and fish,” says Dan. “We’ve made every attempt to be green builders and respect the environment.”

For 25 years Osprey Homes has been building quality products that are affordable and delivered on time, with a team of loyal employees and trusted industry partners.